So I never claimed to be normal. One of the reasons I so unfortunately cannot make that claim is my partiality to the big cat family. Lions, Tigers, Cougars (heh), Leopards, Cheetahs - you get the point. 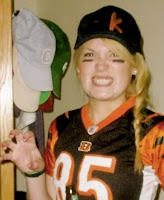 I'm actually only a fan of big-cat themed teams.

Anyway, I recently made a friend who has a similar passion for large kitties. We occasionally text message each other exciting big cat news. Or sometimes just “Roar!” We know what we mean.

Last week, I received a text message from my Big Cat friend asking for my e-mail address. Shortly thereafter, he forwarded me an e-mail offer for discounted tickets to the new documentary “The Last Lions,” asking if I wanted to go.

Did I want to go?

DOES JAMES BROWN GET DOWN?

And now I am here to encourage you to follow in my footsteps and see this film.

It was amazing. An epic visual and emotional journey through the life of a lioness. Who is, simply put, the big cat’s pajamas.

The movie tells the tale of the lioness as a mother and the relationships portrayed are oddly human, the drama and story arc far more moving than a scripted story, and no matter how ferocious the action was at any given moment, let’s be honest, those lions are still adorable.

The main moral of the tale is that while life as a single mom is never easy (can I get an amen?!), the encroachment of humans adds even greater hardship to the animals of Africa.

I just imagined a world without big cats, and it is not a world this girl would wish to live in.