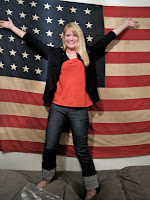 AMERICA DAY. It’s here. I wait for it during the other 364 days of the year - it’s like Christmas to me, but hot. There are so many wonderful things that occur on the 4th of July - stunning fireworks displays, delicious BBQ, a long weekend, families gathering, often from afar - but the very greatest thing is that everyone is so excited about one thing: the birth of the United States of America, and all of the ideals that our fine nation was founded on.

As a reminder that America is more than beer, homeruns and Tim McGraw (sometimes I really do forget), I popped into the New York Public Library to view the various copies of the Declaration of Independence that they put on display each year at this time (strikingly similar to how they also put out a Christmas tree every winter - see it is just like Christmas!).

In the tiny Sue and Edgar Wachenheim III (not like that's pretentious at all) gallery on the main floor of the library you will find a copy of the Declaration, which is actually quite diminutive in size, surrounded by printings of the Declaration in various news outlets of the time. I found myself reading almost all of these papers, although the Declaration was the same, word for word, in each one.

I was struck not only by how comfortingly familiar the first sentences were, but by how very thorough the Declaration is and how very eloquently the argument is articulated. If anybody actually reads this blog, they can witness it as evidence of how much American writers have deviated from this high standard of prose. I use humor (at least that's what I call it, you might call it bor-ing) and candor not only to make an argument, but also as a sort of defense mechanism to demonstrate that none of the opinions here are fiercely held and the writing is not necessarily "flawless."

The Declaration of Independence, in contrast, uses thoughtfully considered language to say, "Absolutely not, England. And furthermore, jump off a cliff King George." This document demonstrates not only the tenacity of the American people, but our high intellectual capabilities. There is a sentence one doesn't hear terribly often anymore, as we are continually reminded that despite our exorbitant wealth as a nation, we are falling far behind in standards of education, linguistic capabilities, and overall impressions of intelligence. And height, which is alarming on another level and which I will discuss in a later post.

So this year, to honor the land that I love and the dead white guys who founded it, I encourage Americans not only to toss back a few cold ones, but also to expand their minds. I, for one, will be borrowing my little roommate's book, The Year of Magical Thinking by Joan Didion in an effort to prevent my brain from actually resembling scrambled eggs both in consistency and in ability to accomplish...anything. (Thanks E.) I hope you do the same (not read the same book - although if you wanted to start a book club with me that would be okay) and be proud to be an American.