Sometimes you just can't catch a break. The past three times that I have flown home, one of my flights has been cancelled. I must hold some sort of record for number of flights cancelled or horribly delayed in one short life. I honestly feel sorry for any city I am flying in or out of, as once the universe hears of my travel plans, it is bound to be struck by some horrible weather front.

Last weekend was perhaps the worst travel experience to date. Minus the perhaps, plus the absolutely, beyond a shadow of a doubt, holy heavens it was awful.

My flight departed on time from Laguardia, much to my surprise. I should have taken our timely departure as a sign of things to come - travel never goes that smoothly for me.

And behold, about an hour and a half into a non-descript flight our pilot got on the mike to inform us that we would be landing in Nashville. Uh...what?

Turns out, although the Cardinals were able to play downtown, the airport had suffered some damage in a storm and was not open for landing Friday or Saturday.

In tears, I headed to a hotel near the Nashville airport to spend the night. My long-suffering dad agreed to make the drive to Nashville the following morning to retrieve me.

After making the long drive from St. Louis to Nashville (and stopping in a Cracker Barrel in Middle-o-nowhere Kentucky, which is another story altogether) I finally arrived home exhausted, relieved, but still feeling slightly sorry for myself.

That is, until I noticed the day's paper on my kitchen counter. The cover featured a photograph of a young mother, visibly distraught, holding her baby in her arms, her house behind her more resembling a pile of lumber than a home.

The storm that I found merely irritating devastated much of the northern Saint Louis area. I was shocked to see how much physical damage the tornado caused, and very thankful that no serious injuries or deaths had been reported.

These incidents certainly humbled me; the minor inconveniences of my life pale in comparison with those who are struggling to put the pieces of their life back together.

The Red Cross and the United Way of Greater Saint Louis are teaming up to meet the needs of affected communities, please go to here to learn more about what you can do to support their efforts!
Posted by Diana Amy at 1:45 PM No comments: Links to this post

Today is awesome because...

Today is awesome because of this:
FREE coffee (...or tea) at Starbucks!!!
And also this:
Big Cats on the big screen!
And also because it is Good Friday (hello the word good is involved!) which I recently learned is technically the end of Lent - I gave up animal products so I will finally be able to enjoy this:
World's Greatest Pizza
Because incidentally I will also be here:
I'm from a city in the Midwest best city in the whole wide wide world
And even though the weather will be like this:
AWFUL
It's all good because we've got this on DVD:
All-time fave regardless of season
And these two faces: 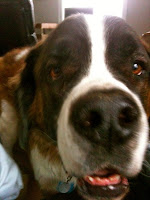 I'm in your face because I Love You! 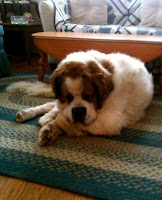 I can't open ma eyes!
Posted by Diana Amy at 3:13 AM No comments: Links to this post 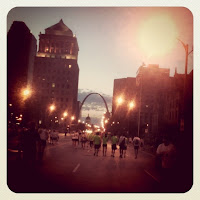 our view at the start of the marathon - good morning Gateway Arch!
Running a marathon is sort of like turning a year older.
Something about you is different...but you don't necessarily feel different.
Tired, yes. Smelly, oh absolutely.
But different?
No, I'm just as dull as I was before.
I returned to the real world, not happily, last Tuesday, a "marathoner," having completed my first 26.2 in Saint Louis two days prior. I have to say that it was an amazing experience. The first 18 miles flew by and were filled with exciting, memory-inducing scenery (view of the Arch, Soulard - which smelled delicious - WashU, Forest Park, downtown Clayton, the Loop). Passing mile 20 I exited the famed "Loop" area and finished out the run on Delmar Boulevard and Forest Park Parkway. Like running on a highway. With hills. In the sweltering heat. And zero fans.
I take that back, I did have one fan, and that was the best kind of fan - the kind of fan who runs with you! For various reasons (shin splints, being an idiot, etc.) my brother did not complete the full marathon as planned, but he did graciously offer to run with me for a portion of the race. I don't think that when he joined me just before mile 20 that he realized he would be stuck with me for the duration, but alas, there we were, in a non-existent neighborhood on Forest Park Parkway and he had nowhere to escape to. Heh.
Honestly, the end of the marathon was so hilly and so morbidly boring that had he not been there, I likely would have started walking the uphills like the runners around me. So, many thanks to my brother for making sure that despite the undesirable weather and difficult terrain, I reached my goal of a sub-4 marathon and I am so excited to get out there and try another, hopefully even more sub-4 than the first. Selfishly, I'm glad that he did not run the marathon. If he had, we likely would not have run together and during those last 6 miles, I would have thought at least 1,000 suicidal thoughts and may have even acted upon one. Or two...I would probably be too tired to be successful the first go-around. But since he was able to run alongside me at the end of a grueling race, he did much more to support me running, and not offing myself. Win-win. 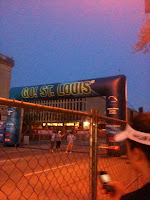 the finish line - as seen before the race began when I was a lame non-marathoner
Anyway, I really appreciated his support and family is invaluable and blah blah blah. It was fantastic hanging with the whole gang last weekend and I am so thrilled that I will be heading back this upcoming weekend to celebrate Easter. I gave up animal products for Lent so there are more than a few Easter sweets haunting my dreams...and Imo's pizza, which will undoubtedly be consumed in a frenzied state on Monday. 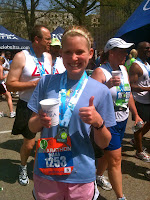 enjoying my free beer & marathoner-status...you just thank your lucky stars this photo isn't scratch & sniff!
Posted by Diana Amy at 11:56 AM No comments: Links to this post